Life in a bland world

Spare a thought for the members of the IPBES – the Intergovernmental Science-Policy Platform for Biodiversity and Ecosystem Services.  We have talked about them before in this blog. While their more famous colleaues on the IPCC – the Intergovernmental Panel on Climate Change – garner continuing headlines, the IPBES languish in obscurity despite the detailed report they produced before the pandemic.  If the world was a stew, the IPCC would be in charge of reporting its temperature and maybe its saltiness, while the IPBES would be in charge of the variety of meats, produce and spices in the stew.  In a world reluctant to pay attention to the gradually heating stew, the IPCC has not had an easy task but the IPBES’ warnings that the stew is becoming blander have scarcely been noticed. 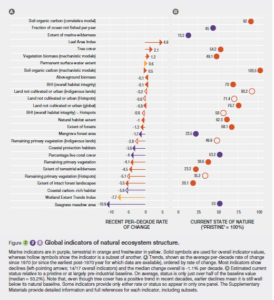 Though general concern about the environment has long received public attention, it is always easier to understand ecology in terms of toxins in our air, water and food.  The more subtle point that the diversity of life on earth is disappearing is more difficult to convey  and also more difficult to get worked up about.  While the IPCC can report pretty confidently how much warmer the world will be for a given amount of gasoline and natural gas consumed, the IPBES tries to convey the loss of wilderness and variety in the world with a suite of 27 measures (see figure).  While the measures each tell a different story, on average they are currently declining and about half as healthy or diverse as at the beginning of the industrial era.

This blog has consistently argued for the importance of biodiversity but making that case to non-scientists is even more difficult than showing a decline in the substance that makes the stew of life flavourful. In Chapter 4 of the IPBES report, the authors estimate the quality of life under a range of development scenarios, looking at everything from energy security to spirituality.  They find a much greater potential for plentiful, secure and familiar lifestyles when biodiversity is conserved. This may have been the answer that they wanted before they started but it is important to recognize the process by which these reports are written. Each statement is scrutinized for accuracy and the confidence with which it is known.  Governments will resist statements that are not in their political interest and yet all the various governments involved in the IPBES agreed to this report.

The solution to the biodiversity crisis is not as clear as the solution to climate change. Essentially, the report recommends an end to economic growth and a much greater emphasis on regional trade rather than global trade. A sustainable planet would value biodiversity and devote half or more of its lands and oceans to it.

This is only their first assessment as an international body, while the IPCC has just completed its 6th report. I believe that the plot, or perhaps the stew, will thicken as they continue to refine their information and models.  Our grandchildren will thank us for not making the world around them poor.